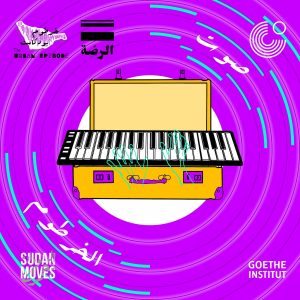 The production team for this episode are:

This episode gives an overview of the alternative music scene in Khartoum within the past 60 years by discussing the diverse influences leading to the emergence and development of Jazz, Zannig, and Rap musical genres in the city. We review the intersections of some of these genres with social class and politics in Khartoum and how they’ve become cultural products that were minimally represented and were not allowed to be fully legitimized by official media channels and institutions, thus they’ve historically been marginalized.

Interviewed in this episode are some of Sudan’s pioneer artists in Jazz and Zannig and through their stories, we discuss the cultural ‘otherization’ and social stigma imposed by the dominant elites against these genres. Despite these circumstances, we explore the process through which Jazz, Zannig, and Rap have become a part of the mainstream music scene in Sudan by utilizing alternative platforms such as the internet and social media.

Through this podcast, we invite Sudan’s youth to participate in the documentation and support of alternative music by any means possible.

We Dedicate this episode to the soul of the legendary Jazz singer and artist, Kamal Keila.

Compiled and prepared by: Almuzn M. and Mohammed A.

This podcast is accompanied with a playlist of all the music featured in the podcast as well as an extensive list of different online resources of online interviews, archives and books, and articles on Jazz, Zanniq, and Rap.

First, here is a collection of songs, performances, and images.

Listen to Kamal Kiela ’s Album: Muslims and Christians. As well as listen to his special singles featured on the podcast:

Listen to these songs by the legendary Osman Alamo:

Also listen to other songs by The king of Sudanese Jazz, Shahabiel Ahmed:

Find The Scorpions’ Album : Jazz Jazz Jazz which include these songs:

Listen to Ya Amali O Noor Ayni and watch their live show in Kuwait in the 1980s.

Find his songs on The Blue Nile Sudanese songs Library by the name Salah Brown: including these songs:

Also watch his special performance of his song Altelophone, featured on the podcast.

And finally, here is a curated list of the most famous Sudanese Jazz bands and singers:

Here is our curated list of Zanniq Artists and musicians!

Listen to Buthaina’s “Jabra” with the famous musician Mohamed Hamed featured on the podcast.

Also listen to other songs by Buthina:

First, watch the legendary Alrubo on his public concert at Atabara here:

Listen to other Zannig singers and artists!

Also listen to other Sola’at by Taso here:

Finally, here are songs by the most recent Zannig singers:

Here is a collection of songs and performances by the most known Rappers on the Sudanese scenes.

Here’s one of the first appearances of Sudanese rappers on Sudan’s TV.

Listen to Flipper’s ‘Gorasa’ featured on the podcast:

Listen to his songs ‘Kul Al Khir’ featured on the podcast:

B Jr aka Lil Bani

Thinking about female rappers? Listen to Selma-I on her two rap songs:

Here is an excessive list of online interviews and television talk show programs that feature some of the singers and musicians mentioned in the episode.

During our research, we have come across many efforts to archive, digitize, and redistribute Sudanese music. We have decided to dedicate this space to highlight their efforts.

Here are some references, including articles and books, that discuss about Sudanese music that you might find interesting!